Charlotte, NC - Teguar Computers has recently added an industrial touch screen computer series to their line of all-in-one pcs. The TP-4040 all-in-one series is ultra slim with a depth of only 48mm and has a die-cast aluminum enclosure. The internal components are designed to endure 24/7 use at industrial automation facilities or warehouse type settings. These industrial computers are targeting the touch panel PC niche where more than a consumer computer is needed, but a tank-like stainless steel pc would be overkill. Elegant design combined with industrial performance features are the hallmark of this series. 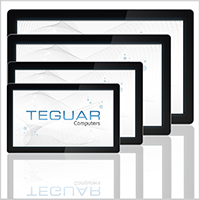 Unlike the sister TS-4040 series, the TP-4040 series it is not made to be used in wet environments or places with airborne debris particles. These computers are designed for indoor, dry environments where key interactions happen with machines, software, and human input. The internal fanless mechanical design provides increased stability for 24/7 industrial use. The smooth lines of the housing make these industrial all-in-one computers easy to look at and easy to clean.

Another key feature the TP-4040 series offers is hardware uniformity at production facilities. Exhibiting industrial automation data in a way that is consistent across screen size and facility location brings a streamlined modern look. Use of multi-purpose industrial computers captures a state-of-the art look that many companies strive for. It also enables IT professionals to easily configure and work with just one hardware platform in any given facility.

The TP-4040 series offers screen sizes of 10”, 15”, 18.5” 22”, and 24” with smooth, black or white piano finishes. Keeney commented that “with these options, end users can have a familiar interface at both the compact 10 inch and the presentation size 24 inch units.  This allows a company to keep its image consistent while filling multiple needs.”Other distinct features of the TP-4040 series are the ease of access to the HDD storage bay and rich I/O options. The twelve to sixteen input outputs include USB 3.0 ports, COM Ports, LAN lines, DIO, VGA, and Audio lines.

Overall, the TP-4040 series is a computer upgrade solution that can be used in all areas of light manufacturing plants. It is designed for those desiring state-of the art industrial automation facilities but still priced well within reach of most hardware budgets. The aesthetics, low power use, and rich I/O options make the TP-4040 series a go-to solution for touch screen all-in one computers. As with the majority of Teguar products, customization is offered for the TP-4040 series.

When Do I Need a Waterproof IP65 Rated Computer?

IP Rating on a Computer: What is it Good For?