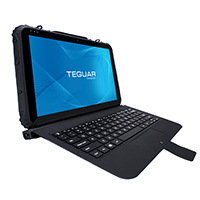 Teguar’s TRT-5180-12 has gained recognition from an independent industry review. Rugged PC Review, an online publication dedicated to rugged computing news, reviews, analysis, and specs has published and evaluation of a Teguar rugged tablet in December of 2017.  The article gives and in-depth analysis of the functionality as well as pros and cons of the TRT-5180-12 rugged tablet.

The Rugged Tablet PC review on the Teguar TRT-5180-12 states that “This is a serious piece of tablet computer equipment, evidenced not only by a very nice IPS capacitive multi-touch display with perfect viewing angles and the same sharpness as a Dell UltraSharp 24-inch 4k monitor, but also by the kind of comprehensive onboard connectivity that many customers need and require. As far as the latter goes, that makes the Teguar the exact opposite of the big iPad Pro with its single tiny lightening port.”

Overall, the analysis of the Teguar TRT-5180 is highly favorable and explains what makes the rugged tablet a great choice for those looking for solid engineering, great processing power, and highly durable components. Read the full review here. or go to product page.

Four Things to Consider when Choosing the Best Outdoor Computer