With the advent of smart phones and tablets, many factory automation software providers have developed Android applications for monitoring and control of industrial automation equipment.  The movement towards IoT enabled devices has also contributed to the effort for remote device control and monitoring.  Users are able to interact with equipment and IoT devices via web-based applications from a variety of devices including smart phones, tablets, and panel PCs.  This is accelerating the momentum of android based industrial computing. 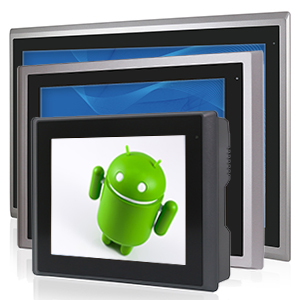 Many industrial automation application users are realizing the benefit of Android based panel PCs.  Android panel PCs are a lower cost alternative to traditional Windows panel PCs for several reasons.  Android computers typically include ARM processors, which are more cost effective than Intel processors.  Android industrial computers are not subject to the operating system license fees that are required with Windows based computers.  Android industrial computers do not require the additional storage capacity and memory requirements that are necessary for Windows based computers.  The significant cost savings associated with these differences is driving the industrial factory automation industry towards Android based computing.

The evolution of Android computing is accompanied by an army of android software developers that take advantage of a simplified software development environment.  Android developers can easily customize applications to accommodate unique I/O devices and create GUIs to manage any industrial application.  The mobility and device agnostic aspects of this software is the basis for many new industrial automation infrastructure implementations.

While the benefits of monitoring and system control with Android devices seem obvious, until recently, this was not realizable in a factory environment.  Consumer type Android tablets are not suitable for industrial environments, as they lack the ruggedness and environmental ratings that are typically required.  While Teguar’s IP65 rugged tablets are ideal for applications where mobility is required, they are not always optimal for applications where an Android touchscreen computer needs to be panel mounted into an enclosure or attached to a device in a fixed location.  Teguar’s Android panel PCs are better suited for these applications.  These panel PCs offer the same Android touchscreen user interface, and they include the rugged IP65/IP66 waterproof ratings that are necessary in many manufacturing environments such as food and beverage manufacturing. The TP-A945 series fanless Android panel PCs are optimal for applications where dust and liquid exposure is common.  These models are available in screen sizes ranging from 7” up to 21.5” with resistive or projected capacitive touchscreens to suit the needs of many factory automation IoT applications.  The TS-A945 series panel PCs expand on the ruggedness capabilities of Teguar’s Android panel PC line up with a full IP66/IP69K stainless steel enclosure.  These models are perfect for wash down environments where an all-in-one waterproof Android panel PC is required.

It may be time to consider Teguar Android touchscreen panel PCs as a lower cost alternative to Windows based panel PCs.  They are a more rugged solution and are configurable to meet the needs of any Android factory automation application, For more about Teguar’s line of Android Panel PCs contact sales@teguar.com  and check out our android panel pc product listings.