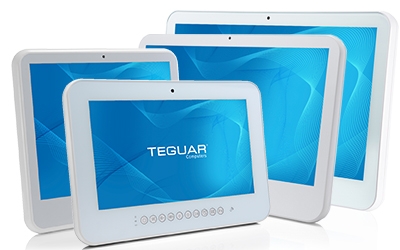 The new TM-5010 series replaces the TM-3010 series and offers 24”, 22”, 19”, 17”, and 15” touchscreen sizes. The driving factor for the series is the 6th generation Skylake core i3/i5/i7 CPU which offers the highest performance for the 24” size in the medical panel PC market. Another significant factor is the upgrade in certification. Medical UL/EN 60601- 4th Edition has been instituted as a requirement for all new medical devices and every size has been certified to this higher level of EMC medical compliance.

Features and options imperative to critical care have been included in the TM-5010 healthcare computer series. Advanced graphics capabilities for optional DICOM certification on the 24” are included for camera dependent surgeries such as endoscopy. An optional back-up battery pack, ability to connect to multiple medical monitors, and 4KV isolation give further versatility for applications in critical care.   For up to 10 Gbps transfer rates of files, USB 3.1 gen slots have been added. Remote computer break-ins by unauthorized users are prevented by Intel vPro and TPM v2.0 to eliminate any security concerns. One of the most distinguishing features of these medical computers is the PCI-E (x4) expansion slot option which sets this series apart from competitors.

Durability and hygienic maintenance are integral to the design. There are three key factors of protection that were taken into consideration during the design phase. First the flat, fanless design which has limited crevices for bacterial growth. Second, the front-rated IP65 and overall IPx1 housing can withstand standard cleaning chemicals. Lastly, there is an anti-bacterial coating on the PCs which helps prevent the spread of MRSA. Ten flush front function buttons including a screen pause for cleaning, reading lights, volume control, and programmable function key seem intuitive, but are not on many other medical computers. These types of features set the TM-5010 healthcare computer series apart.

Jul 24, 2018by Cory Hovanetz
We use cookies on our website to give you the most relevant experience by remembering your preferences and repeat visits. By clicking “Accept All”, you consent to the use of ALL the cookies. However, you may visit "Cookie Settings" to provide a controlled consent.
Cookie SettingsAccept All
Manage consent